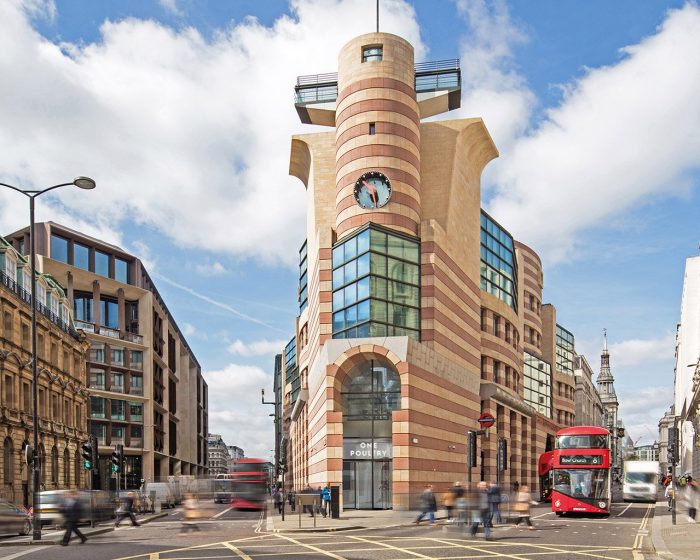 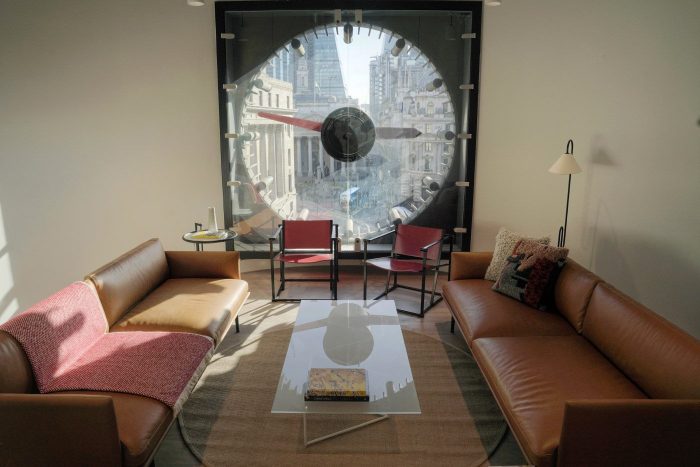 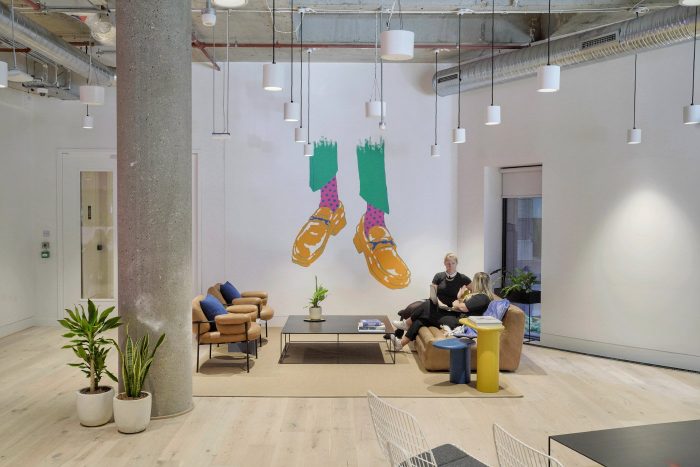 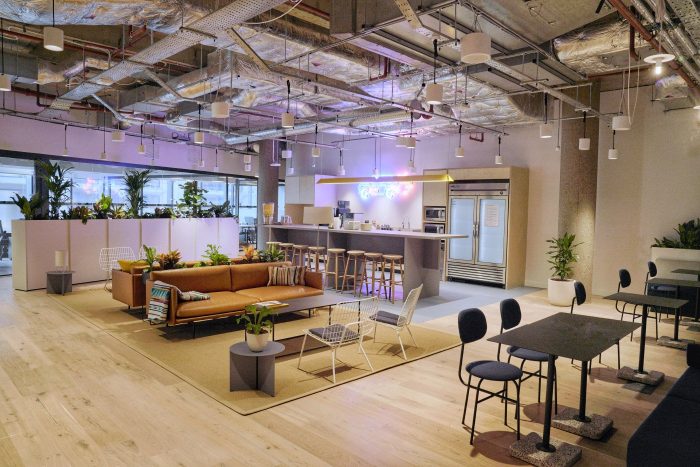 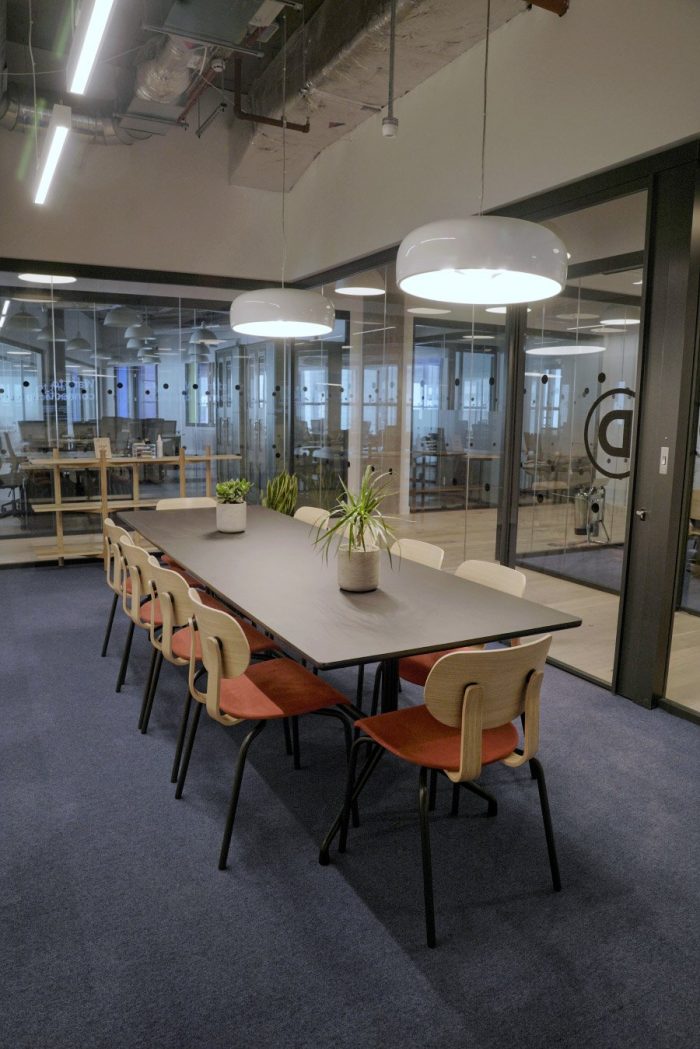 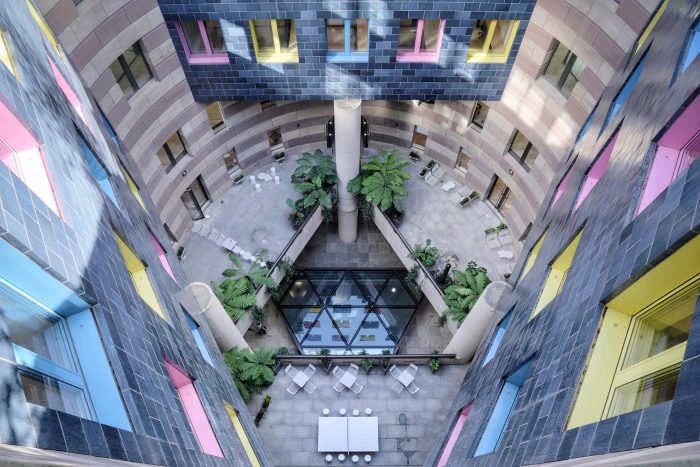 <
►
>
WeWork has taken over London’s iconic Number One Poultry building. Exterior photo of the revamped One Poultry (Courtesy One Poultry)

Global co-working (and education, and fitness, and budding neighborhood planning) company WeWork first announced that it would be taking over London’s protected Grade II* Number One Poultry building back in November of last year. Now the company has finished its move into James Stirling’s postmodern icon and released photos of the interior conversion.

Completed in 1997, five years after Stirling’s death, One Poultry is the youngest building in the UK to win Grade II* protection—despite its regular appearance on lists of London’s worst buildings. Stirling’s scheme, with its triangular massing, alternating bands of yellow and pink limestone, embankments of undulating columns, lavishly decorated spandrels, and prominent prow (complete with a telescoping clock tower) famously beat out a glassy 18-story tower from Mies van der Rohe after public outcry was raised over the latter’s inappropriateness for the area. The realized One Poultry also opens in the middle to a triangular interior courtyard splashed with cyan, magenta, and yellow.

London’s BuckleyGrayYeoman had originally been tapped to renovate and convert the 110,000-square-foot One Poultry into office space. The renderings released at the time presented an upscale, if staid, vision of the interiors, complete with herringbone floors and open benching. WeWork’s internal design team took over instead and built out office spaces that unmistakably stay true to the co-working company’s in-house aesthetic, while also referencing the building’s colorful exterior.

“We took advantage of this beautifully designed James Stirling building,” said Andy Heath, the director of WeWork’s European and Australian design department, “harnessing the natural light that pours into the space, and made sure every part—even the prows of the building—were thoughtfully designed to foster collaboration, productivity, and our home-from-home feeling.

“Bold colours and homely furnishing can be seen throughout the building, where the scheme was inspired by the postmodernist era of design so thoughtfully conceived by Stirling. The artwork—created by our own in-house Arts & Graphics team—resembles workers wandering the nearby streets, bringing the vibe of Bank into the space.”

WeWork opted to use puffy furniture and primary colors in the common areas, not dissimilar to the aesthetic of the all-women work club The Wing (in which WeWork invested during its latest funding round). The outdoor plaza has been turned into a common area for WeWork members and outfitted with new furniture, and the even the area behind the building’s clock on the fourth floor has been turned into a lounge that frames a view of the adjacent Bank junction.

One Poultry is WeWork’s 28th location in London and is expecting to house up to 2,300 members. Retail stores are located in the building’s ground floor and basement-level spaces, and WeWork occupies the building’s remaining five floors and has installed a roof garden, restaurant, and wellness lounge.